Tell me who you are?

by Stinky
posted in Stories
No comments yet

‘And you’re also telling me you can talk?’

‘Ummm your questions are confusing. Aren’t we talking now?’

They stood there in silence just watching each other. They had just met and this was the first time Stinky had ever received such a reaction. It was a tense moment with eyes looking, staring, analysing. His gaze seemed to leap into the depth of Stinky’s being trying to search for something that would be deemed a logical explanation. He found nothing. The wind was blowing, making noises that would deter many from venturing outside. The skies began to drizzle as though it heard the calling of the wind and came to see what was going on. He opened his mouth and out came the weirdest, out of character response of all.

He walked over and slapped Stinky on that back and gave him a big bear hug. Whatever intensity existed mere seconds ago had all but dissipated to be replace with a new found confusion, albeit a happier more relieved one.

‘My name is Joey. Who would of thunk it? A pig that talks! You, my friend, are one of a kind!’

‘Oh my! You scared the living daylights out of me. Please don’t do that again. I wasn’t expecting to bump into anyone. What on earth are you doing here?’ Stinky asked as he wiped the imaginary sweat from his brow.

They stood under a waterfall in the middle of the forest. There was a cave mouth that Stinky would often visit so he could watch the magnificence and beauty of the cascading waters. He had never seen anyone here before.

‘I live here. You could even call me a guardian of sorts. Most people don’t really get the opportunity to see me but you can consider yourself one lucky pig!’

‘Err can you stop calling me that? I’m not different to you. I live, I breathe and I have feelings and emotions and sometimes cry when watching a sad movie. Tell me that’s not normal’

‘So what does a guardian do anyway? Do you just sit in the shadows and scare people like you did to me today? I would have thought a guardian would look like a hero as large as a mountain and as strong as the trees that surround this forest. You just look like an overgrown kid that plays tricks on people whenever you feel bored’

‘That’s where you’re wrong my new friend. My youthful outlook is deceitful and does not reflect my true age. I have been around here much longer than you have. I have seen small shrubs grow into trees that stretch beyond reach and its canopies touch the heavens. I guard the sanctity of nature and dispel those who seek to ruin it’

‘Wow. You are important! In my whole life I never thought I would meet someone as mysterious as you. It almost seems mystical when you stand and talk whilst the waterfall is your backdrop. Am I disturbing your… ummm… guardianship?’

‘Don’t be so formal young friend. You could say that I have many helpers so that makes my job a little easier. I don’t come out often but when I do I just adore meeting pigs… I mean people like you. It’s refreshing to say the least. Speaking of refreshing, I need to make haste and leave you now’

‘But we just met! How will I contact you or see you again? There are so many questions I want to ask you Joey’

‘We’ll meet again. I just hope that when I see you next you still remember me’

And with those last words, Joey turned and run at speed into the waterfall. He seemed to vanish into the mist of the waters. Stinky screamed out to Joey but he did not listen. As Stinky edged toward the curtain of water he did not see any sign of him. At that very moment he heard Joey’s voice.

‘Stinky, my new friend. Don’t you ever change! Always hold onto the pure, kindhearted soul that you possess. Oh and by the way, not everyone called me Joey. Sometimes they call me Mother Nature’

Stinky sat down as his knees were beginning to buckle. What had just happened here he thought to himself? Moments had passed and he stood, keeping balance by holding onto the side of the cave mouth. He made his way out of the forest and it was at that very moment where he realised what had happened. He was just blessed by Mother Nature herself… himself… who knows. He turned and walked and said ‘Wow’ to no one in particular. 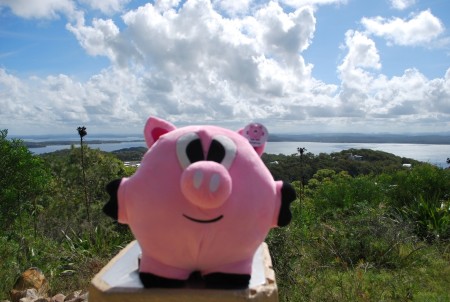 By definition, charity means the voluntary giving of help. It comes in all shapes and sizes. You walk down the...